I’m closing in on 90 days. I wanted this space to be more of a daily journal, but I haven’t made time to write. I have started draft after draft but then get stuck and overwhelmed with things to talk about. There are so many things to talk about. Sobriety opens doors and closes doors only to open other doors again.

I’m learning that sobriety isn’t something we are supposed to talk about. You should keep your non-drinking ways a secret. Don’t ruin the party by not drinking silly girl! I get it. I didn’t want to hang out with the non-drinkers when I was a drinker. They made me uncomfortable. Why would someone want to stay sober? Life is so much more vivid when we are numb to it.

Now that I’m a “non-drinker” I find myself still uncomfortable with the non-drinkers. I want to hang out with the “sober” people. I relate to that. I want to hang out with people who have been through some shit. People who get it. People who choose to drink seem like prudes. I know they aren’t, but this is my thought process, and it’s all I got right now. I guess I want to be around people who know what it’s like to have a drink with friends then go home to drink half a bottle of vodka. That is something I understand.

I have heard from so many people who didn’t know I had a problem. That’s because when you have a problem you get real good at hiding it. I would go out with friends and have a drink or two then go home and continue to drink.

It seems common for women drinkers to prefer drinking alone at home. Women don’t go hang out at the bar. For me, that was nonsense. I drank vodka. It was too expensive to drink at the bar. Besides, a woman drinking alone at a bar is a target for every guy drinking alone at the bar. No joke. I went to the bar one time alone. My friend was bartending so I thought it was safe to go hang out there. I got hit on by countless men (some were married even) and one couple. They asked me to “take pictures” of them and then started talking about their sex life.

After the bar experience I stayed home. I didn’t have to worry about being hit on or driving. It was cheaper and I could drink as much as I wanted. It was peaceful when my life seemed everything but peaceful. A beautiful ugly escape. But people don’t want to hear about that or why I quit drinking. They only know that I quit and now I’m no longer invited to things. No one asks me how it’s going staying sober unless they themselves have gotten sober.

Fortunately I’m not alone. I feel very lucky to have Iz who is getting sober with me. I have someone to go out with on non-drinking dates and someone to talk to about being sober. We have grown closer since sobriety came into our lives. But I worry about the women who don’t have an Iz. Those who don’t have someone at home to drink fizzy water with. How are they doing it?

I’ve heard from friends who said they were a few days sober, then drank wine, or a few weeks sober then drank beer. How do I tell them it gets easier when they don’t have someone doing it with them? It is so hard to do it alone. I know. I’ve tried many times. 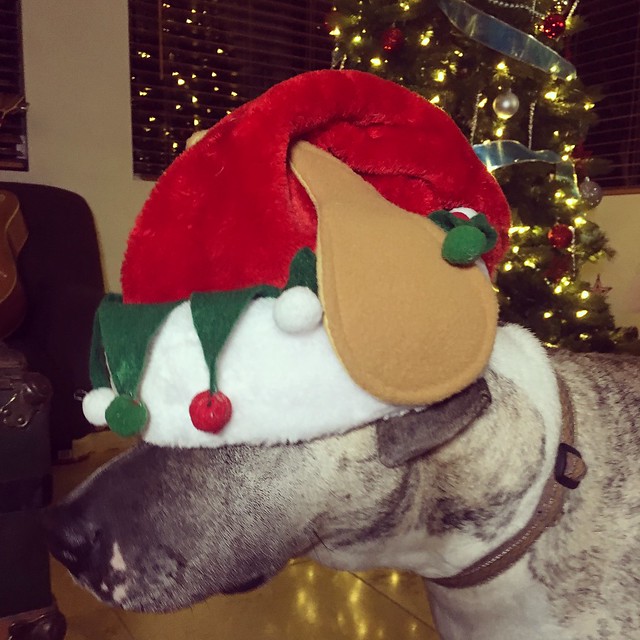 Axl is feeling the holiday spirit.

Hey gorgeous. How you doin?
Yesterday we hiked 10 miles in the Preserve by our house. I don’t know if it’s all the yoga, hiking, running, or Nailed It episodes that’s giving me this sense of calm, but I’ll take it because this is most definitely not my go to feeling.
I told Izaak I wanted to hike somewhere scenic, but I didn’t want to drive forever to get there only to find out it’s closed. We decided to hike the trails by our house and found somewhere scenic. Switchback’s with poppies everywhere.
The problem with this whole unemployed with no side hustle thing is that I’m home all day finding more and more trails to hike around the world. 🤷🏻‍♀️